Calgary Diocesan Council’s centennial anniversary is a celebration of our incredible sisterhood of Catholic women who joyfully live their call to ministry through the League. Our 100-year journey is attributed to generations of devoted members who have embodied a spirit of faith, service, and social justice in their parish and community.

This historic occasion is a grand opportunity to celebrate who we are as Catholic women and as a Catholic women’s organization. What a wonderful occasion to pay tribute to our pioneering sisters and to express gratitude for members’ blessings to the League and each other.

The Anniversary Planning Committee has launched several initiatives as listed below:

You can Bring our Vibrant History to Life!

Browse through your personal and council photo albums for historic photos for our history book. Email them to Janet MacPhee. 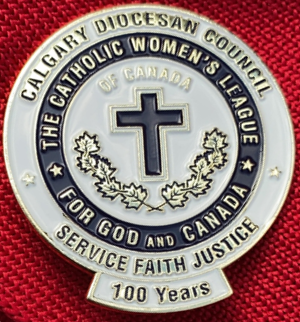 Diocesan Council's 100th Anniversary Lapel Pins - These beautiful souvenir pins are only $5 each, including delivery. They are white and royal blue with gold printing. They are 1 3/8" wide and have two push pins for stay-put security. The pins are a great gift for yourself and other members!

Purchase at the Diocesan Convention or order through Renee Spohn at 403-892-6641; etransfer funds to .

A tribute from Bishop McGrattan The members of the Catholic Women’s League in Calgary have dedicated themselves to the Church’s mission in ways that have supported families, parishes, and communities.  Your legacy of work covers many areas including spiritual growth, education, and advocacy for the teachings of the Faith to be evident in the secular community.  You have consistently witnessed to the dignity of the human person from conception to natural death and you have explored creative ways to support access to palliative care, hospice and home care for those facing terminal illness or who are close to death in your local communities.  This work brings you faithfully to prayer and you bring this commitment to prayer to your homes, parishes, and your CWL colleagues.

For 100 years or more, you have “put your minds, hearts and hands together to serve God, the Church and Canada”.

I take this opportunity to thank you for your witness to the Faith, and your dedicated efforts to be leaders in your parish communities.

May God continue to bless each of you and the good works you undertake in his name!