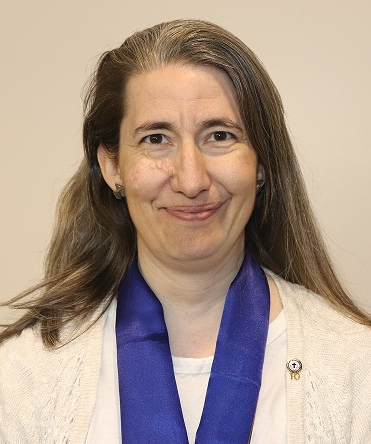 Doreen was born and baptized at the local parish in Clearwater, BC. She is a descendant of French-Canadian roots that have called Canada home for over two centuries!

She began her higher education in Kamloops, BC before moving to Calgary where she achieved her CGA; later becoming a CPA – Chartered Professional Accountant.

She married Andrew in 1998 and began her family in 2001. They proudly attended son, Alexander’s Grade 12 graduation in May.

Doreen joined the Catholic Women’s League in 2007 as a member of St. Francis de Sales council in High River. She has progressed from general member through various executive positions, including: Resolutions, Legislation, Secretary, Treasurer, President and Past President. She has also served on several committees, such as: funerals, fundraising, scholarships, and the 90th Anniversary. Doreen was a member of the planning committee for both the 2014 Diocesan Convention in High River and 2018 Provincial Convention in Okotoks.

One of Doreen’s highlights was accompanying Fr. James Hagel and other parish families to France in 2018. They participated in the Pilgrimage of St. Francis de Sales and journeyed across France in the footsteps of their patron saint.

Doreen enjoys volunteering in her parish and being an active member of her community. Most of her spare time, after family and working full-time for the Government of Canada, is taken up by friends, yoga, crafts and CWL.

Doreen looks forward to serving as Diocesan Secretary for the next two years. She feels extremely blessed to belong to the League and to have so many sisters to love.