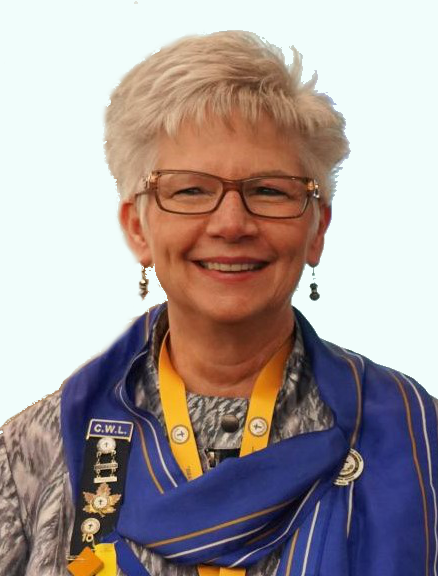 Jan has been a member of the League since 2006.  She is married to Jim and has a blended family with 7 children and 15 grandchildren.

Moving back to Calgary after being away for 25 years, Jan wanted to meet new friends and so decided joining St. Peter's CWL would be one way of building new relationships.  She has always been involved in the parishes she belonged to, in various capacities, so when she joined St. Peter's CWL, she decided she was going to take a break, just pay her membership, and not be an active member.  So she told herself.  Well, it wasn't long before Jan took on the role of treasurer.  She didn't really know what the CWL was all about until she became a member of her council's executive.  She was treasurer for 4 years, then agreed to become President-Elect in 2010, and her role of council President was from 2011 – 2013.  By attending the Calgary regional meetings, the Diocesan Fall Meetings and Conventions, she quickly picked up on the fact that the CWL isn't geared only around her local council, but throughout the diocese, province and country!

She attended her first National Convention in 2012 in Edmonton after a resolution St. Peter's presented was passed at both the diocesan, then provincial convention, and from then on, her involvement and love of the League has grown.  Jan was appointed diocesan secretary in 2013, took on the role of diocesan communications in 2015 then let her name stand for diocesan president-elect in 2017.  When Jan became diocesan president in May 2019, little did she know the pandemic would change the world, and her two year term became three.

Jan is now diocesan past president and is looking forward to a new challenge as the upcoming changes in the Constitution & Bylaws shapes the future of the League.

After a 14 year career in the oil and gas industry, Jan is now working at the Catholic Pastoral Centre, and remains active in her parish at St. Peter’s in Calgary as well.  She loves spending time with the kids and grandchildren, and hopes to get back to travelling.