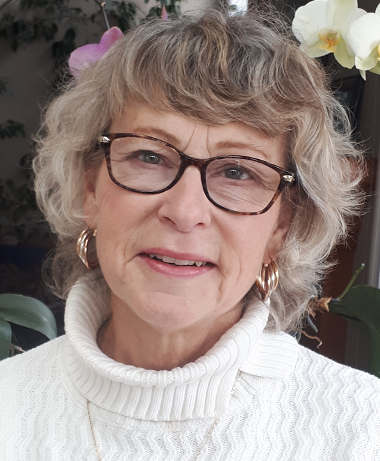 As a native Albertan, Gayleen has lived in Vegreville, Northern Alberta, Edmonton, and Calgary. She graduated from the University of Alberta with a science degree in psychology, math, and computing science before realizing that what she really wanted to do was have fun with kids every day! So, she went into elementary education.

After raising three children and being a stay-at-home mom while supporting her husband, Eric in the oil patch (four of those years spent in Saudi Arabia), she went back to teaching in Calgary. She taught for fifteen years before retiring at the birth of their first grandchild twelve years ago.

Gayleen loves being involved in the lives of their five grandchildren who live nearby. When time permits, she and Eric love to cook for friends and family, hike, and bike the paths around Calgary. She dabbles in watercolor painting, Spanish, and knitting in her free time.

Gayleen and Eric have been members of St Patrick’s Parish (Calgary) for thirty years serving in various ministries. For several years, they were involved with the Mission Mexico committee of their parish. In that capacity, she visited Cuernavaca twice to witness first-hand the needs of our friends in the south and how we could work together with them. She has also served as a lector, Eucharistic Minister, baptism team member, and RCIA sponsor. She also supports Eric in his SSVP commitments.

One of the most meaningful experiences of her life was to walk in the steps of our Lord in the Holy Land and witness the “living stones.”

As a young mother in 1977, a close neighbor and friend persuaded Gayleen to join the CWL in Swan Hills. Her most treasured memory of her League sisters was camping with four of them in their motorhome in Namao, north of Edmonton, where they sang in the choir when Pope John Paul II visited in 1985! In Calgary, she served her council as President, CWL representative for the diocesan Social Justice Committee, and printing co-chair on the CWL 2019 National Convention Planning Committee. She now looks forward to serving as your Legislation Chair.

Gayleen says that the CWL has been the crucible by which her faith has grown as an adult. She is so inspired by her sisters in Christ. She would love you to call her any time to chat about anything that is on your mind regarding legislation. God is Good!