The month of November provides a special opportunity to remember and pray for our beloved dead. On Friday, November 1st we celebrate All Saints’ Day. In our churches, we have memorial books where the names of those dear to us are recorded and remembered. With this in mind, let me write to you about the importance of All Souls’ Day on November 2nd. 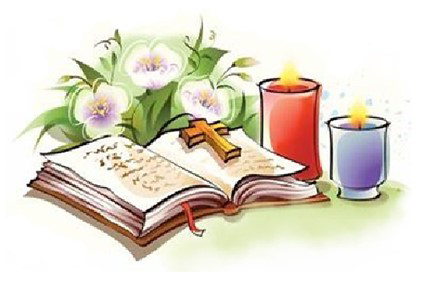 On All Saints Day, we honor the Church in Heaven and on All Souls Day, we commemorate the Church in Purgatory—the deceased faithful who are on their way to Heaven. Their present period of purification will infallibly end with their vision of God and union with the other saints. This, then, is not a day of mourning. We rejoice because our faithful departed have been judged worthy to be with God.

As early as the seventh century, certain monastic communities had specific days for commemorating the dead of their community. This practice spread, and by the ninth century it had become a commemoration of all the dead. In 998 St. Odilo, Abbot of Cluny, France, established that in his communities the commemoration of the faithful departed was to be celebrated on November 2nd.

In the fifteenth century, the custom arose in Spain of celebrating three Masses for the deceased on November 2nd and this custom prevailed throughout Spain, Portugal, and Spanish America.

Then in 1915, Pope Benedict XV—aware of the great number of deaths during World War I, which was then raging—extended to the entire Latin Church the privilege of celebrating three Masses for the deceased on this day.

Throughout the month of November, we can remember the Purgatorial Church with special prayers and visits to cemeteries. By so doing, we can actively live out the Collect for All Souls’ Day, when the Church prays:

Listen kindly to our prayers, O Lord,
and, as our faith in your Son,
raised from the dead, is deepened,
so may our hope of resurrection for your
departed servants also find new strength.

This month also affords us to pray for a holy death for ourselves, so that we too may one day be numbered among the Saints.

THE WORD OF GOD

The Scriptures do not stand on their own; they must be explained, interpreted within the context of the living faith of the community, and applied to its present circumstances, often radically different from those out of which the text first arose.  The proclamation of God’s word in the liturgy provides the best possible context for the authentic interpretation of the Bible.  In the liturgy the biblical context is proclaimed to the assembled Christians, and the apostolic leader of the community explains its significance by relating it to its original situation, to the whole plan of God, to the faith of the Church, to the practical concerns of his particular community, and to the experience of the Lord in the Eucharist.

The Jewish tradition of liturgical proclamation of the Scriptures includes a tradition of interpretation.  In the synagogue services of ancient Palestine, the Scriptures were read in Hebrew, but since many in the congregation understood only Aramaic, an official of the synagogue would provide a running translation in that language, a targum, which was a kind of paraphrase including within it a commentary on the text.  The spiritual leaders of the synagogue community would also preach on the various scriptural texts.  In Luke 4 we have an account of Jesus reading the scriptural text and commenting on it.

In Justin’s description of the Eucharistic liturgy, a member of the community reads the texts and then the leader explains their meaning.  Down through the centuries, liturgical proclamation of the Scriptures has been inseparable from the homiletic interpretation.  Many scriptural commentaries of the Fathers of the Church are really homilies on the texts proclaimed in the liturgy.  In our own day the Constitution on the Liturgy states that “through the homily, the hidden realities of faith and the guiding principles of the Christian life are explained over the course of the liturgical year from the text of the scripture: (Sacrosanctum Concilium, 52).  The homily is a basic element of the liturgical reading of the Bible.

THE LECTIONARY: The Sacred Text in the Eucharist

When the first Christians developed a Liturgy of the Word to precede the celebration of the Eucharist, they were influenced by the practice of the Jewish synagogue, where the main liturgical event was a series of scriptural readings.  The five books of Moses - the Torah - were read systematically, section by section.  Other passages, from the prophets were also read.  It took time for the New Testament writings to be accepted as “Scripture” by the first Christians:  when they thought of Scripture they normally meant what we call the Old Testament.  But gradually, as we see in the quote from Justin (November Newsletter), they came to read out passages not only from the ancient Hebrew Scriptures, but also from writings concerning Christ.

In early centuries the various Christian communities had different ways of arranging the readings.  A common pattern was to have one or more Old Testament readings (The Prophet), New Testament readings (The Apostle), and a Gospel.  As the various Christian communities developed their systems, the appropriate passages were marked in the biblical text to guide the reader.  Later, the texts were copied out into special books, the first lectionaries.

Palm Sunday of the Lord's Passion