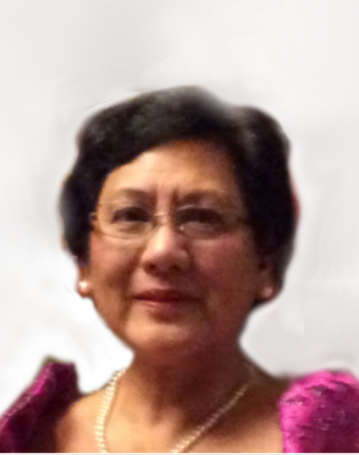 Consuelo was born in the Philippines, and earned her Bachelor of Arts degree in English Language and Literature from the University of the Philippines.  In 1972 she married her husband, Oscar. In 1975, they and their two-year old daughter migrated to Canada where their two sons were born.

In Calgary, Consuelo's work in accounting broadened her knowledge, and she pursued a Business Management Diploma Program at the University of Calgary, and took courses in Petroleum Accounting at Southern Alberta Institute of Technology

For five years, Consuelo opted to be a stay home mom making the well-being of her three growing children her priority.  She volunteered at their schools and helped her children in their academic endeavours as well as in their various out of school activities. She proudly saw her daughter become a leader of the Youth Ministry at Holy Trinity Parish which allowed her to attend the first World Youth Day in North America in Denver, Colorado. Her two sons travelled to several countries including Finland and Russia as Calgary’s Ambassadors of Good Will and as members of the Calgary Boys Choir. They were also altar servers, and accompanist and cantors of the Holy Trinity Parish choir.

In 1999, Consuelo and Oscar moved to the United States. She worked and took courses improving her knowledge of policy and assisting her as a Compliance Coordinator and Compliance Analyst. While in San Diego, CA, she was a parishioner and lector at the Good Shepherd Parish, a huge multicultural Catholic community. A devotee of the Sacred Heart of Jesus since 1967, she joined the Sacred Heart Apostolate group that prayed together every first Friday of the month. She also continued her weekly Wednesday devotion to Our Mother of Perpetual Help.

By 2010, they returned to Calgary. Having taken early retirement and dreading boredom, Consuelo volunteered for several organizations including Feed the Hungry, TD Read with Me, Society of St. Vincent de Paul, St. Peter School, and UP Alumni Association of Alberta. Committed to Holy Trinity Parish, she served as Eucharistic Minister, lector, and chair of the Stewardship Committee.

She joined the Holy Trinity Parish CWL in 2011. Although a CWL newbie, she enthusiastically attended the 2012 CWL National Convention in Edmonton. There she realized the opportunity to “make a difference” and returned to her parish council to serve as Legislation and Resolutions Chair. In 2019, as President she developed the council’s first policy and procedure handbook and a spiritual retreat to increase Marian devotion. She encouraged her CWL sisters to deepen and strengthen their faith by actively participating in the parish spiritual activities and devotions.

Consuelo strongly believes in leading by example, and that daily integrating our lives with Jesus and His Blessed Mother is the key to faith fulfillment and genuine service to others.